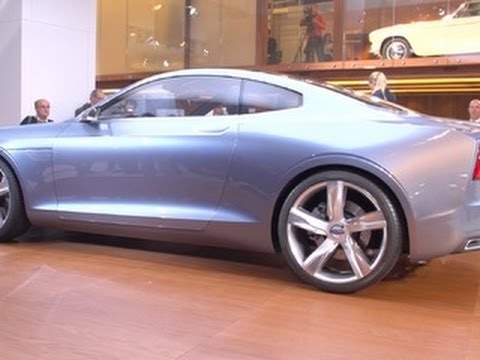 Volvo has teased its latest C Coupe this week just days before the official unveil at the Frankfurt Motor Show next month (12th – 22th September). The first teaser showcases the front end of the vehicle, the grille, headlamp and panels clearly. The images were however edited and the Volvo logo was removed from the rims and the grille. This therefore raised the anticipation regarding the vehicle till the time Volvo officially revealed the teasers.

A second video was revealed by Volvo soon after and in it the exterior was showcased briefly. A creased shoulder line, slender door mirrors and the C shaped LED Daytime Running Lights have also been installed and this gives the vehicle a new appeal. Overall, the vehicle looks sleek and masculine at the same time and the vehicle has already sent ripples through the minds of the spectators.

The car is rich in aesthetic value and can easily make the big German players such as Mercedes Benz, Audi and BMW make a dash for their money. Even though some people feel that the car resembles the likes of Cadillac and Chrysler, you cannot deny the fact that Volvo has never tried anything like this in the past. This is what sets this car apart from the rest.

The C Coupe is a one of a kind machine designed to bring back elegance to the already cramped market segment. There are a lot of posh coupes in the market at the moment, but none of them have anything new on offer. Volvo has seized the opportunity to design this one of a kind Coupe. Even though the first video is just 11 seconds long, it has revealed enough of the vehicle for a teaser.

The C Coupe has set up a designing benchmark and future vehicles from Volvo could be based on the designing elements of the C Coupe. The wide haunches of the vehicle are the current favorite among the critics while the new LED design has appealed many. Volvo has finally come up with a design which is elegant as well as practical and although no power train have been revealed as of yet, the car is expected to be efficient, considering the fact that it is a Volvo.

Despite the teaser, nothing concrete regarding the C Coupe have been revealed although it is confirmed that Volvo is not what it used to be, at least in terms of designing. Its new Chinese owners Geely are quite determined about the way the cars look and even though use of technology is still at its best.

Volvo is known for its subtle exterior along with the rather aged design and the designing team has completely changed that aspect with the C Coupe. These vehicles are more suited to the demands of the younger generation and hence a rise in sales is anticipated soon. Even though Volvo has not announced a possible launch date, people are not complaining as the launch date is just round the corner.

Hyundai presented the new H350 at the show dedicated to commercial vehicles IAA 2016 held in Hanover, Germany, from 21…

NCAP has just finished her test on the new Citroen C4 completed. The car scores on each unit less than…

The Fiat Group in the second quarter of 2010 performed better than expected. The group doubled its operating profit. In…