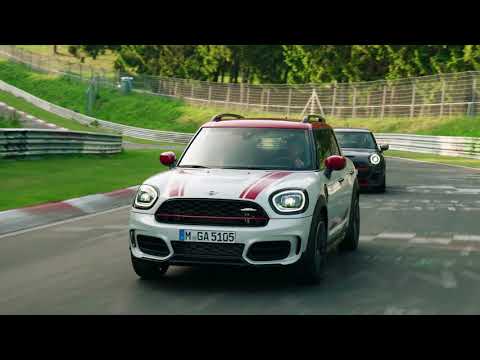 Earlier this year, MINI treated its biggest / most adventurous scion, the Countryman , with additional equipment / personalization options, more modern interiors and additional electric driving range for the PHEV version. Now the Countryman John Cooper Works top version undergoes the same, but without engine updates. The Countryman JCW had already received a (solid) power increase to 306 hp / 450 Nm (in combination with standard 8-speed automatic transmission and ALL4 four-wheel drive, 0-100 km in 5.1 seconds) and that is apparently sufficient.

The refreshed MINI Countryman John Cooper Works does it with a new grille, custom LED light blocks and LED fog lights, of course there are also LEDs with the Union Jack pattern at the back. The White Silver and Sage Green shades and Piano Black Pack (black accents all around) make their entry into the spacious personalization guide. Inside we note (optional) a digital 5 ”counter lot in combination with new equipment details while the payload of up to 1,390 liters is maintained.

By the end of 2020, we expect the Countryman John Cooper Works to be redesigned at the local MINI dealers.

The last weeks were quite turbulent weeks for automaker Saab. Baic, a Chinese car maker, says continues to show interest…

Ssangyong launches the new Korando in the United Kingdom

Ssangyong Motors has officially launched the Korando, the production line vehicle developed from the concept SUV, SUT 1 which was…

Suzuki is a brand recognized for its know-how at city car level. Therefore, the new Suzuki Baleno is exactly what…